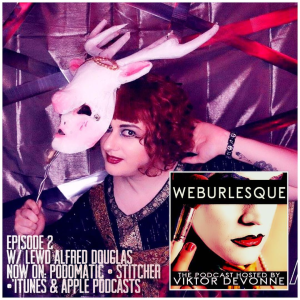 On the second episode of WEBurlesque The Podcast, Viktor meets with burlesque performer, illustrator, and cosplayer Lewd Alfred Douglas.

Along with his husband, fellow artist and tattooer Fyodor Pavlov, Lewd Alfred runs Dr. Sketchy’s, a live drawing salon series where models and patrons will dress to fit a certain theme or time period; “We loved throwing costume parties that… different kinds of artists attended anyway. We always kind of lamented that our place was too small to throw the kind of costume parties that we wanted, and we thought if we ran Dr. Sketchy’s we could do these loving tributes to different time periods and artists could come in and draw or photograph or whatever they do.”

Besides Dr. Sketchy’s, Lewd Alfred ran Uncle Monty’s Mollyhouse, an immersive experience where audience members would be transported into the world of a 19th century bordello: “I was in a terrible retail job that I absolutely despised, and my co-workers sat down with me one day…and they said ‘Ok, if you don’t have to think about what is feasible…what would be the ideal situation you could find yourself in as a profession?’ And I said running a reenactment Victorian brothel…and that became Uncle Monty’s Mollyhouse.”

Much of Lewd Alfred’s love for the historical comes from his pursuit of finding the queer histories that have been buried by mainstream straight society. He and Viktor talk about what that is like and why Douglas thinks of himself as a “social justice necromancer;” “Because there have been so many very intense movements to bury our history and our ancestry and, in some cases,to obliterate our ancestors…burn records, files, and people…and especially our generation where our elders were completely decimated by the AIDS epidemic so we don’t have a touchstone of history that everyone else has. And when ever we get those, to me they’re very very precious…it’s empowering to go and dig those up…those fragments that we can still find and know there are lots more there.”

After talking about queer history in general Lewd Alfred gets into his own history and how he realized he was a transman: “I first kind of vocalized [that I was trans] in high school…I had been taking from a public high school to a private [one] because I was being bullied…and I helped to found their first gay-straight alliance… and I kind of found the word transgender and it was a conversation with my best friend [at the time]… and I was talking to her about like my first and second ever boyfriend experiences… I really liked them but there was something about the way they were attracted to me and the way that I felt in myself when I was with them in an affectionate, romantic, or sexual context that I didn’t like. And I couldn’t really understand what it was until I verbalized it to this older friend of mine and she was like ‘Have you thought that you might be transgender?’ and I was like ‘Oh yeah I know that that word exists.’… Through experimenting and being like ok I’m going to try being a boy…it just solved the discomfort.”

And then what it was like being a trans burlesque performer in the New York scene before and after getting top surgery: “I did burlesque before I got top surgery and I think by the time I was doing burlesque in New York properly, I had scheduled [the operation]. So I knew I was going to have it eventually…When I made my acts [before] I always constructed the act knowing I was going to do down to a binder…I don’t want to say that I wanted to hide the fact that I was trans but I definitely wanted to go down to a male shape and have an excuse for there to be a binder there…There was a lot of my life really up until I got top surgery where I didn’t want to be chained with the burden of having to explain I was trans all the time because it gets really tiresome…But after I got my top surgery I felt so much more confident in myself…and more forgiving of everything else I had to deal with that I didn’t mind talking about being trans anymore.”

The discussion then turns to cis actors playing trans characters and how unnecessary it is: “If you have a cis actor playing a trans character, why on earth couldn’t you give that job to someone who really needs it? And I get that sometimes you need o have a big name, but there is no reason why-and Laverne Cox is kind of confirming this for us- … a trans person can’t achieve stardom.”

And then finally ends with a small look into Douglas’ artistic career as one of the creators of the Bash Back comic series and his inspirations: “I take a lot of inspiration from the graphic illustrator style that you would find in Victorian and turn of the century magazines…now when I do digital stuff I’m trying to be a little bit more painterly with it and involve more colors…I guess I describe my style as being very linear…when I sit down and have to do an assignment I usually feel very stiff and nervous about it so it usually doesn’t come out as good as when I’m just free thinking.” 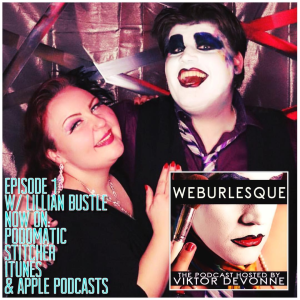 On the inaugural episode of WEBurlesque The Podcast, Viktor Devonne talks to the “Titties from Jersey City” Lillian Bustle, burlesque performer, actress, and fat acceptance advocate.

Lillian jumps into the podcast by bringing up about her beginnings in New York City and how difficult it is to become successful as an actress even when you think you are taking the right step; “I tried really hard to make money in theater and never figured it out. I got so far as to get my Actor’s Equity card and my SAG-AFTRA card. Then I realized I wasn’t able to do the stage stuff that I wanted because … I told everyone on the planet [since] I was so excited and then couldn’t fly under the radar…and then I wasn’t performing at all which sucked.”

From there, her and Viktor talk about how she got into burlesque and what the New York scene is like. Lillian has some great advice to give about how to approach someone if you want to give them feedback on their act: “I find that even if I’m friends with somebody, I will say…not right after they get off the stage, but latter on… ‘Hey, do you want some feedback because I had a thought about your act.’ And sometimes people say no and that’s totally fine.”

As well as some thoughts about the proliferation of nerdlesque in the area: “I do sometimes feel like I’m not enough of a fangirl to participate…in the New York burlesque scene because a lot of it is nerdlesque…I do feel like I’m missing out but also feel like a total faker the couple of times I have tried to put together a [nerdlesque] act… The reason I was never into super heroes (and) sci-fi… was because there were no fat people in either of those spaces. And I was like “Welp, I guess in the future and in space they have eradicated fatness.’”

This leads into a discussion about the images of fat people in popular culture and how Lilian sees herself: “I always felt pretty. To the point that my friends would call me out because I would always gaze at myself in windows and mirrors… and I felt like I wasn’t always making that connection with other people… There are many ways to appreciate yourself and for me it was more the first time I was with someone that loves me fore the whole package. Loved me for my personality and my face and my body and not in spite of those things.”

These feelings set Lillian on the path to becoming an advocate for larger bodied individuals and while it isn’t always easy, she is happy that her work creates positive change for others; “I get a good dose of why am I here, what exactly am I doing and what is the point… in everything but in burlesque specifically… just when I’m like, ‘Is this really worth it?’ every fucking time I get a message from somebody telling me how I’ve affected them in a positive way and it takes my breath away every single time.”

Finally, she and Viktor end the episode talking about how diversity in all its forms is needed in burlesque and how we must all strive to be better advocates of it; “Something we have to think about when it comes to diversity in general is what are we putting out there as a community?” Every time I produce a show I feel like I’m telling a story about what burlesque is to the person watching.”